What is the Cycle of Abuse?

Chapter Four of The Abusive Personality: Violence and Control in Intimate Relationships by Donald G. Dutton starts with the author looking back on past interviews, writing, "As I look now at the interview notes I took from female partners of our clients, the phrases jump off the page at me: "He's like two different people," "He's like Jekyll and Hyde," "He's completely different sometimes..."" These continue on finishing with the phrase, "He's like living on an emotional roller coaster." 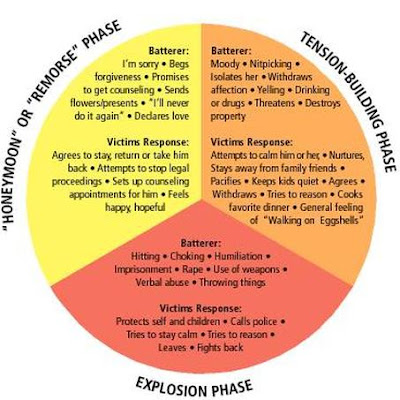 'The Cycle of Violence,' or 'The Cycle of Abuse,' was something I learned about after leaving my abusive ex. And it is something I want to share more because I remember thinking "This explains so much." The chart to the right is one of the more detailed versions of this cycle which can be seen in three stages-- occasionally more, but these three encompass the big points. These stages explain what the author's clients are talking about-- something I, too, am familiar with.

Dutton goes on to say that the three phases-- tension-building, explosion, and calm (or honeymoon/remorse on the diagram)-- "could vary in timing and intensity." This means sometimes the time between the honeymoon period and the next explosion could be an hour or a week, shorter or longer. I remember in the abusive relationship I was in, some weeks would seem perfect, and then I would talk to the wrong person or say the wrong thing and the explosion would come as soon as we were in private.

Today, I want to go through these three stages with the descriptions given by Dutton in The Abusive Personality and give some of my personal experience as well, starting with the 'tension-building.'

Dutton describes this stage very well, writing, "the man escalates whatever form of abuse her has been using; possessive smothering, verbal harangues, 'gaslighting...,' or physical brutality. The woman typically goes into survival mode and caters to his every whim in a desperate attempt to avoid the inevitable... He becomes hypervigilant for any signs of defiance."

I can remember times like this very clearly when every breath of disagreement was instantly crushed; when I felt like if I could just keep him happy, things would be okay even though I could feel the build-up. The thing about the stage of tension is that there is no way to prevent the oncoming explosion. I would be smiling, trying to do things to make my abuser happy, but none of it worked. He would still by simmering, moody, and often derogatory or antagonistic towards me, like he was trying to lure me to do one thing wrong. Sometimes I would stand up for myself, sometimes I wouldn't-- it all led to the same place.

The explosion itself it pretty explanatory, and perhaps that is why Dutton doesn't explain it much, leaving it short with, "The tension buildup continues to the point of the battering incident." This, of course, does not have to be physical abuse. The incident may be an intense outpour of verbal abuse, it could be threats or strong manipulation for an example of emotional abuse. Often the explosion for my abuser was shouting-- something that I can't stand to this day-- and getting into my face while doing so, sometimes cornering me or keeping me confined in an area.

One of the explosions I remember best was right before my school's After Prom. We had gone to my home to change after the dance, and watched movies during which time I shut down several advances, which made him furious. Already he had been simmering the whole day after plans did not go as he wanted and due to the fact I had gone on a trip he did not want me going on-- thankfully I did remain in control of parts of my life. In any case, on the drive to our high school, he started yelling like I had never seen, in a way that made me fear for my life as he bypassed our school and pulled instead into the abandoned middle school. I honestly thought he might hurt me at that time. He wouldn't allow me out of the car until I had stopped crying when he finally turned around and drove to the high school.

There were other instances like this, and while they were terrifying, Dutton puts into words something that is sometimes hard to explain: "Sometimes, sensing that it [the explosion] is inevitable, she defies him just to get it over with." One might ask 'why would you?' and I feel like that is easy to explain, but maybe harder to understand (even for someone who has gone through it). Dealing with abuse is, in a word, exhausting. It is emotionally draining. Your life is survival, and during the tension you are walking on thin ice, waiting to fall through. Sometimes the tension can bring on more stress and anxiety than one can cope with-- and sometimes that tension can last a week or more, with the abusive relationship I was in the tension often lasted longer than the honeymoon stage. Moreover, I feel like many victims know after several cycles of this that once the 'explosion' is over, things might be calm for a while. And often? It is.

I think that Dutton really captures the abuser's mindset as he explains, "the perpetrator has alienated his wife [or partner] and now seeks to "woo her back" to the relationship. He promises reform and recruits others (e.g., her mother, the local priest, mutual friends) to persuade her to return. He promises... whatever she wants. He brings her flowers, gifts, cards and pleads to be forgiven. He works on her guilt." This is where the phrase 'I couldn't live without you' often comes up, small matters of manipulation that bring the victim back in-- and often the abuser will work in how it was the victim's fault among all the wooing.

After particularly bad blow ups, my abuser would often try to win me back, though towards the end he more tried to buy me back. After the prom incident-- after which I was on the brink of breaking up with him after telling my friends what had happened-- he showed up at my house with a gift card and hardly said a thing... perhaps because we were already back to the tension building stage. But other times, he would take me to a movie or we would do something I wanted to (which was a rare occurrence in the final two years with my abuser).

This cycle leads to something Dutton calls 'traumatic bonding,' though he isn't the only one to speak about this, and I plan to elaborate on it in next weeks blog-- so be sure to check it out! I hope that this post has given you some new knowledge and please share it if you feel so inclined! You never know who might need to read this to realize what's happening in their own life. It could make a big difference.

If you know any organization (scouts, church, etc.) that would like to have a speaker on Teen Dating Abuse, please contact me through my website here with your email address. To keep up with updates on this blog please feel free to hit the subscribe button in the top right corner to be alerted to new posts every Thursday. Have something you would like to know more about in the future? Leave a comment and I'll do my best to answer right away! Remember, the first step in solving the problem of teen dating abuse is awareness!

Popular posts from this blog

Resources if You Are in an Abusive Relationship

August 06, 2018
When someone is in an abusive relationship, it is easy to feel alone and like there is no help or hope. Sometimes people simply do not know where to look. While calling 9-1-1 seems to be the most likely solution (and something I highly support),  The Hotline  did a survey of abused women which stated that  4/5 women were afraid of calling the police . Some areas-- such as that of the Pickens County Georgia Sheriff's Office and the State of Tennessee-- are trying to lessen that fear by releasing videos such as the two shared here. However, there are other places to reach out to or to use for help if you are one of those 4/5 that does not want to involve the police. The Hotline is one of the best resources for victims of domestic/intimate abuse, along with its sister site Love is Respect which is aimed more towards teenagers and young adults, as well as parents and friends of those that may be involved in an abusive relationship. Both of these websites have online chat availab
Post a Comment
Read more

What is Traumatic Bonding?

January 31, 2019
Many people outside of an abusive relationship often don't understand why a victim doesn't just leave. I have covered the topic of exactly why it isn't always as simple as breaking up-- or moving out in the case the victim is already living with their abuser-- in a former blog post ( click here! ) but today I really want to discuss in depth one of the lesser thought of factors. I mentioned in last week's post, What is the Cycle of Abuse,  that the abuse cycle can bring on something known as 'traumatic bonding.' This is something most abuse victims, myself included, fall to unknowingly.   In his book The Abusive Personality: Violence and Control in Intimate Relationships , Donald Dutton writes, "This process [traumatic bonding] is an attachment to the abuser formed by the prior power differential in the relationship coupled with intermittent abuse. The result is a powerful attachment bond that begins to operate on the abuse victim with time away from the a
1 comment
Read more